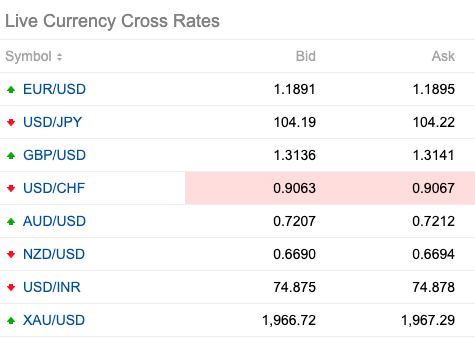 Major Currency Rates at 8 AM

The U.S. dollar extended its recent decline on Thursday after U.S. President Donald Trump raised the possibility of delaying the nation’s November presidential election, while the euro hit a two-year high.

The greenback has been in a month-long nosedive as the continued spread of coronavirus across U.S. states weighs on the economy, and is on track for its worst monthly performance in a decade.Data on Thursday showed that the U.S. economy contracted by 32.9% in the second quarter, the steepest pace since the Great Depression.

Asian equities were set to rise on Friday after shares of Apple, Amazon and Facebook  surged in extended trading on Thursday, with Alphabet  also climbing, while the U.S. dollar continued to slide.

Oil prices sank on Thursday following poor U.S. economic figures and after U.S. President Donald Trump roiled markets with a suggestion that the nation should delay its November presidential election.