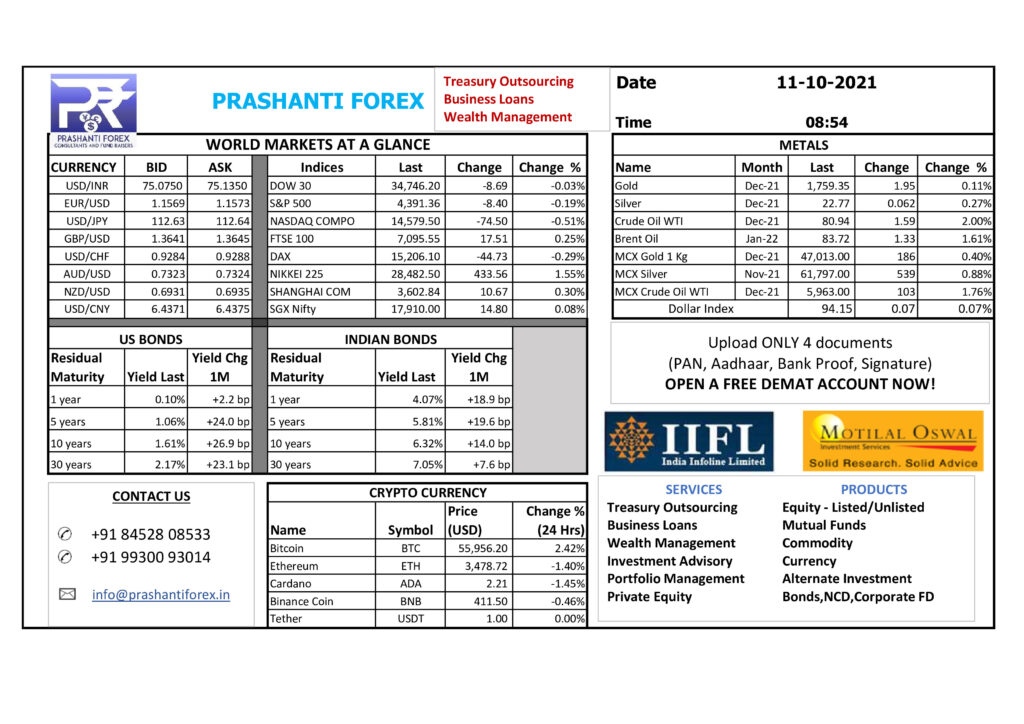 The dollar ticked up to a 2-1/2-year high versus the yen on Monday after a soft U.S. payrolls figure did little to alter market expectations that the U.S. Federal Reserve will announce it will start tapering its massive bond-buying next month. The U.S. economy created the fewest jobs in nine months in September, with nonfarm payrolls increasing 194,000, way below economists’ forecast of 500,000.

The British pound held firmer at $1.3623, extending its recovery from a nine-month low set late last month, on growing expectations that the Bank of England could raise interest rates to curb soaring inflation. The Canadian dollar changed hands at C$1.2473 per U.S. dollar, having hit a two-month high of C$1.24525 on Friday thanks to surprisingly strong Canadian payrolls data and lofty oil prices. Elsewhere, the offshore Chinese yuan changed hands at 6.4438 per dollar, its Oct. 1 high of 6.4286.

Hong Kong’s Hang Seng index rose 1.73% in morning trade. Mainland Chinese stocks were also higher, with the Shanghai composite up 0.22% while the Shenzhen component advanced 0.286%. In Japan, the Nikkei 225 rose 1.57% while the Topix index jumped 1.36%. Elsewhere, shares in Australia lagged, with the S&P/ASX 200 down 0.54%. MSCI’s broadest index of Asia-Pacific shares outside Japan traded 0.55% higher.

Oil steadied near the psychological $80-a-barrel mark as a global power crunch rattled the market while OPEC+ output has been slow to ramp up.

It steadied near the psychological $80-a-barrel mark as a global power crunch rattled the market while OPEC+ output has been slow to ramp up.

World Markets
September 28, 2021
Subscribe to our Blog
By subscribing to our blog, you will automatically get a mail every time we publish any post
Book an Appointment
CEO – Rajat Prasad