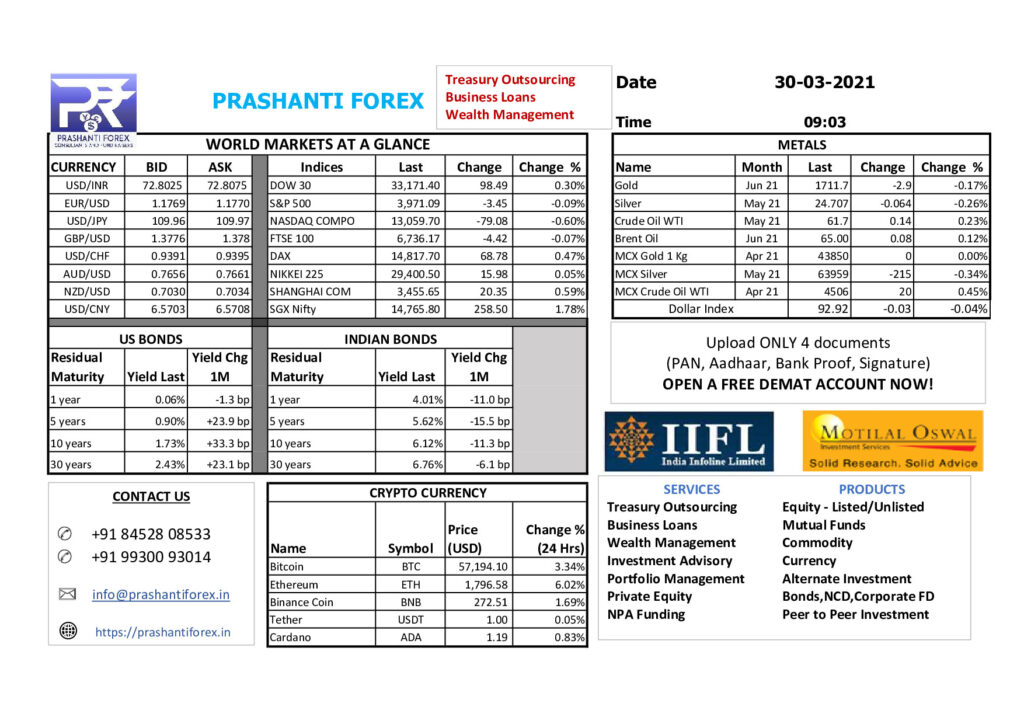 In Asia, the MSCI’s broadest index of Asia-Pacific shares outside Japan was marginally higher by 0.08% in early in the session Tuesday. Hong Kong’s Hang Seng Index was up 0.36% to 28,440 but in Australia a weaker tone emerged when the S&P/ASX200 slid 0.4% to its lowest point for a week. Mainland China’s CSI300 index is 0.18% higher in early trade while Japan’s Nikkei is off 0.1%.

The dollar climbed to a one-year high against the yen on Tuesday amid a spike in Treasury yields, as accelerating vaccinations and massive stimulus in the U.S. stoked inflation concerns.

The safe-haven greenback also found support as investors fretted about the potential fallout from the collapse of a hedge fund, identified as Archegos Capital, although those jitters had eased as the Asian trading day got underway.

The dollar rose as high as 109.89 yen in Asia on Tuesday, a level not seen since March of last year. It’s on track for the best month since late 2016, with the end of Japan’s fiscal year this month driving up dollar demand as companies seek to square their books.

Oil prices edged higher on Monday after Reuters reported that Russia would support stable oil output from OPEC+ ahead of a meeting with the producer group later this week.

Futures had fallen earlier in the session on news that a container ship in the Suez Canal blocking traffic for nearly a week had been refloated. Brent oil rose 26 cents to $64.83 a barrel . U.S. crude rose 47 cents to $61.44 a barrel.

Ø Amazon plans to step up e-payments, financial services in India

Ø Govt gets multiple EoIs for privatisation of Neelachal Ispat Nigam

Ø GameStop takes $6-bn round trip as results shrugged off

Ø Ascendas India Trust to acquire space in Bengaluru IT park for ₹1,441 crore

Ø Ever Given starts to move in Suez Canal: maritime traffic tracking sites