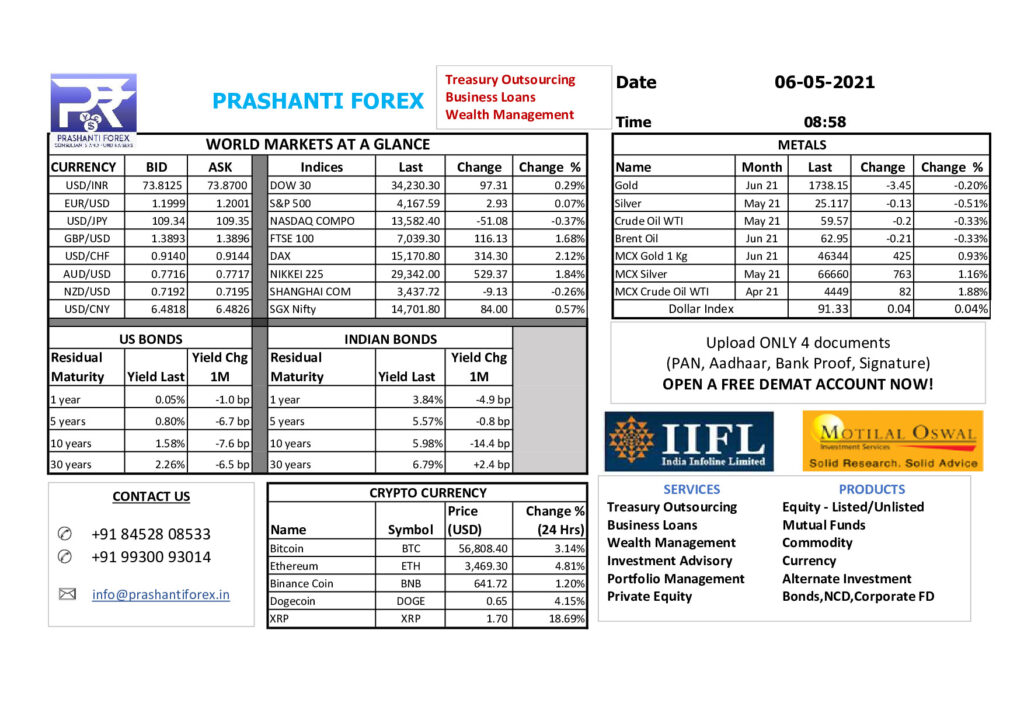 The dollar hovered below a two-week high on Thursday, consolidating ahead of a key U.S. jobs report that may provide clues on when the Federal Reserve will dial back monetary stimulus.

The dollar index, which measures the U.S. currency against six major peers, was little changed at 91.316 on Thursday, after rising as high as 91.436 in the previous session for the first time since April 19. It had dipped as low as 90.422 on April 29.

The euro traded at the psychologically important $1.20 mark on Thursday, after dipping to $1.1986 on Wednesday for the first time since April 19. The dollar bought 109.34 yen, consolidating after rallying as high as 109.695 on Monday, a level not seen since April 13.

Asia-Pacific stock markets were mostly higher on Thursday as investors look to the U.S. jobs report this week for clues about how long the Fed will stay on hold.

Japanese markets returned to trade for the first time this week after being closed for public holidays. The benchmark Nikkei 225 jumped 1.98% while the Topix index was up 1.97%. South Korea’s Kospi, which was also closed in the previous session, rose 0.7%. In Hong Kong, the Hang Seng index was up 1.15%.

Chinese mainland shares traded for the first time in May after being shut for public holidays. The benchmark Shanghai composite rose 0.21% while the Shenzhen component declined 0.87%. Meanwhile, Australia’s ASX 200 slipped nearly 0.6% as most sectors were in negative territory.

Oil prices fell on Thursday as gasoline inventories in the United States, the world’s largest oil consumer, rose for a fifth consecutive week although a draw in crude stockpiles helped to underpin prices.

Ø India will sail through the Covid storm, says Finance Minister