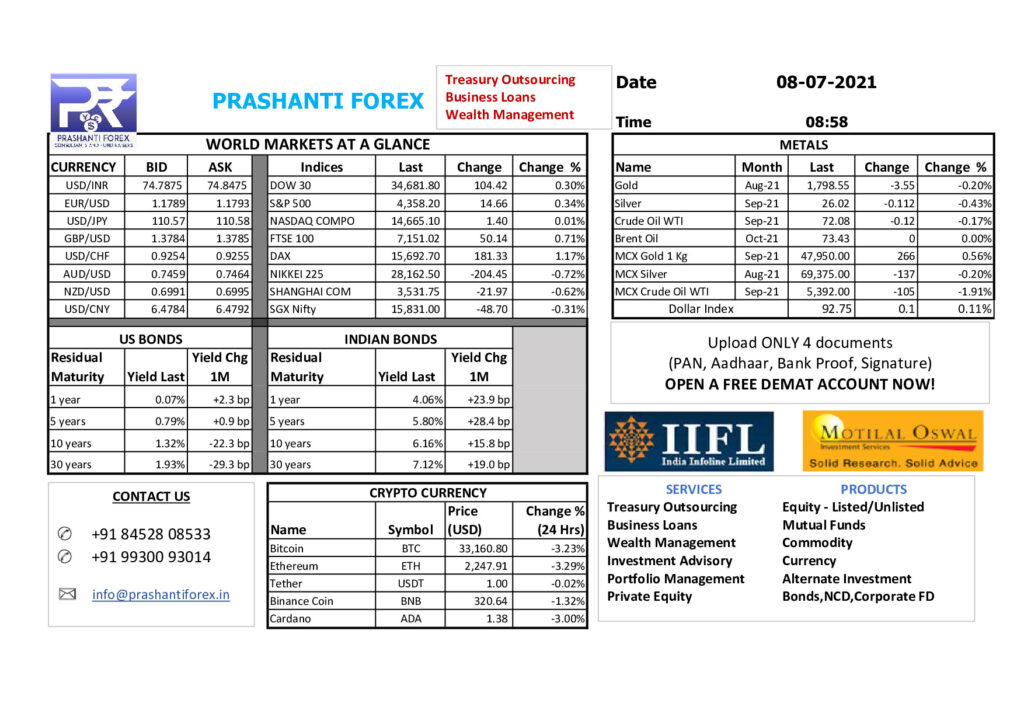 The dollar traded near its highest in three months versus major peers on Thursday after minutes of the Federal Reserve’s June policy meeting confirmed the world’s biggest central bank is moving toward tapering its asset purchases as soon as this year.

The dollar index , which measures the greenback against six rivals, held its ground at 92.702, little changed from Wednesday, when it touched 92.844 for the first time since April 5. The dollar traded at $1.1792 per euro , just off a three-month peak of $1.17815 touched overnight, when German data raised doubts about the strength of Europe’s economic recovery.

Elsewhere, the dollar traded slightly lower at 110.555 yen , as the pair continued to be weighed down by a slide in U.S. Treasury yields. The Australian dollar , widely viewed as a proxy for risk appetite, traded 0.1% weaker at $0.74745

Shares in Asia-Pacific were mixed in Thursday morning trade, as Chinese tech stocks in Hong Kong came under pressure after regulatory fears resurfaced

The Hang Seng Tech index declined 1.57%. In Japan, the Nikkei 225 slipped 0.52% while the Topix index declined 0.24%. The Kospi in South Korea fell 0.43%. Mainland Chinese shares were mixed, with the Shanghai composite 0.17% lower while the Shenzhen component advanced 0.512%.Over in Australia, the S&P/ASX 200 advanced 0.37%. MSCI’s broadest index of Asia-Pacific shares outside Japan traded 0.66% lower.

Oil prices fell for a third day on Thursday amid anxiety that supply may rise after the collapse this week of talks among major producers, potentially causing the current output agreement to be abandoned.

Brent prices have fallen about 5.3% since Monday’s close after talks between the Organization of the Petroleum Exporting Countries and its allies, including Russia, known as OPEC+, fell apart when de facto leader Saudi Arabia refused demands from the United Arab Emirates to raise its output under the group’s supply cut agreement.